If you were hurt on the job due to negligence, you deserve compensation.

At Paul Padda Law, our Las Vegas personal injury lawyers are immensely proud of our client-focused approach and the results we obtain for our clients. When negligence or reckless conduct results in a serious workplace accident, we know your livelihood and your family’s well-being are your chief concerns, in addition to your considerable pain and suffering.

We begin by truly listening to your story and the effect it has had on you and your family. After hearing your story and addressing your immediate concerns, we will conduct an in-depth review of the circumstances. It may take time, but we gather and analyze all the evidence we can. Throughout this time, we are always available to answer your questions and provide updates on your case.

It is through this client-centered process that we can bring strong injury or fatality claims and fight hard for the compensation our clients deserve. We have a track record of success, including obtaining $160 million judgment for one of our clients. To learn about how a Las Vegas work injury lawyer can help you after getting hurt on the job, contact Paul Padda Law at 702-366-1888 or through our online form. We offer free consultations.

In 2016, Nevada’s private industry experienced 33,900 non-fatal workplace injuries and illnesses, according to the Bureau of Labor Statistics. This resulted in an incident rate of 3.7 injuries and illnesses per 100 full-time equivalent workers. This is significantly higher than the nation’s average incident rate of 2.9 cases per 100 full-time equivalent workers. The incident rate in the trade, transportation, and utilities industries was 4.7, demonstrating how dangerous these sectors can be. If you worked at a large establishment, with more than 1,000 workers, your risk was even higher. Large establishments had a non-fatal injury and illness rate of 4.9. The leisure and hospitality industry, a staple of Las Vegas, had a rate of 4.3.

Nevada’s state and local government employers did not fare any better than the private sector. The government sector reported 4,400 injury and illness cases in 2016, resulting in a rate of 4.5 cases per 100 full-time workers. However, compared to the national government rate of 4.7, Nevada’s public sector is roughly average.

The same year, Nevada reported 54 fatal work injuries. Transportation accidents led to 18 deaths, while injuries by people or animals (including violence) accounted for 12 fatalities and exposure to harmful substances or environments caused 11 deaths. Trip and falls were the fourth most common causes of fatal workplace accidents.

At Paul Padda Law, we see the aftermath of Nevada’s high workplace injury and fatality rate. We work with individuals every day who suffer serious injuries in accidents at work or who lose loved ones unexpectedly. We are here to listen to what happened to you or your relative, investigate the incident, and advise you on your right to file a third-party claim.

The National Safety Council reported that in 2016, a worker was injured on the job every seven seconds, accounting for 4,500,000 work-related injuries, and 104,000,000 lost production days.

We Handle Claims for all Types of Nevada Workplace Accidents

Our job injury lawyers have worked on a wide range of workplace accident cases, from individuals who suffer a back injury at work to those who are victims of violence. Whatever happened to you, we are here to listen to your story and advise you on what to do next. If you were injured in any of the following accidents, or another type of situation, call us today.

If you were injured while working, do not hesitate to speak with a lawyer. You have every right to tell your story and learn more about your rights and options. That is why we offer free consultations at Paul Padda Law. There is no risk in learning about how we can help you, such as by pursuing compensation through a third-party liability claim.

If you were injured at work, you might be experiencing:

After being injured on the job, contact a Las Vegas work injury attorney at Paul Padda Law. We will guide you through documenting your injury, including the diagnosis, treatments, and its full consequences on your life. We will gather evidence of the economic and non-economic impact of your injuries to ensure we properly value your claim and pursue an appropriate amount of compensation.

Who Is Responsible for Accidents at Work?

When you are hurt while working, the best thing to do is speak with a workplace accident lawyer. By hiring an attorney, you have someone who knows how to fully investigate the incident, determine who was at fault, and determine which party is liable. In many circumstances, the specific person who caused the accident is not legally liable. Instead, their employer is responsible for their conduct while they are working and is liable.

The party liable for your workplace accident depends on the circumstances. If a coworker or another agent of your employer was negligent, and you are not covered by workers’ compensation insurance, then you may have the right to hold your employer responsible. If a worker from another employer was at fault, then that other business may be liable. Also, if someone unrelated to your work, or a client or customer, caused you harm, then that individual may be liable.

Call Paul Padda Law today and let us investigate your claim. We will advise you on who is liable and the best way to pursue a recovery.

When you get hurt at work, your mind may first turn to workers’ compensation. Depending on the situation and whether you are covered, you may be able to obtain medical and wage benefits through a workers’ comp claim. This is a claim you file with your employer and your employer’s insurance carrier. If all goes well, you do not have to file a lawsuit to obtain these benefits.

A third-party claim is different from workers’ compensation. When a person or business other than your employer is responsible for your injuries, then you may have the right to file a lawsuit against them and seek compensation. This liable individual or business is the third party, distinct from you and your employer.

These types of claims also differ on the possible compensation you may obtain. Workers’ comp is typically limited to your medical expenses and a certain portion of your average wages. It will not cover the full economic cost of a serious injury at work, and it will certainly not cover your pain and suffering. When you pursue a third-party claim, you can seek compensation for all of your economic and non-economic injuries.

At Paul Padda Law, we represent individuals in third-party claims arising from workplace accidents. If you wish to know more about your rights and legal options after getting hurt at work, contact us to schedule a consultation with a Las Vegas work injury lawyer.

When a Las Vegas cocktail waitress seriously injured her shoulder in an accident that prevented her from working, Paul Padda Law helped her recover $115,000.

If you were injured at work and have the right to pursue compensation through a third-party claim, talk with Paul Padda Law about possible work injury compensation, including:

Calculating these damages can be difficult. If you are seriously injured and will require future medical procedures and care, we will work with you to determine your future expenses. If you lost a great deal of income or you are not able to return to your previous profession, then we will utilize an economic loss expert to properly calculate your reduced earning capacity and the wage loss you may experience throughout your life.

Some of the hardest damages to calculate are your non-economic injuries, such as the value of your physical pain and mental anguish. How do you place a price on the pain and discomfort you experience every day? How do you convert your anger, embarrassment, grief, depression, and anxiety into a monetary figure? A workplace injury lawyer at Paul Padda Law will explain the various methods used to calculate non-economic damages, including multipliers of your economic damages or daily sums.

The total value of your case will depend on a number of factors, including the type and extent of your injuries. Call us today to schedule a consultation and discuss the value of your damages. Once you know what your claim is worth, we can focus on negotiating a work injury settlement or pursuing your claim in court.

Virtually, every state has a statute regarding contributory negligence, which arises when the individual seeking compensation for injuries is also partially at fault for the incident. Under Nevada’s doctrine, known as a modified comparative negligence approach, a defendant can be held liable for compensating the injured party as long as the defendant is at least 50 percent responsible for the accident. That means, as long as you are 49 percent or less at fault for your accident and injuries, the other party must still compensate you.

If a court finds that you are in any way at fault for the accident and your injuries, this will impact your claim. The amount of compensation you receive from the defendant will be reduced by your percentage of fault. For example, you win your third-party claim and are awarded $100,000. However, the court found you were 20 percent at fault, and the defendant was 80 percent responsible. You will only receive 80 percent of your compensation, $80,000.

After suffering an accident at work or losing a loved one in a work-related accident, call Paul Padda Law immediately. As experienced job injury lawyers, we treat each of our clients like family. We focus on what you need to recover and move forward in life. We are always honest regarding your rights, the difficulties of the legal process, and the best and worst case scenarios.

Additionally, we know that the fear of legal fees often holds people back from hiring a lawyer. We work on a contingency fee basis. We do not get paid unless we win your case, enabling you to have the legal representation you deserve.

To discuss your rights and legal options, call 702-366-1888 or use our online form to request a consultation. 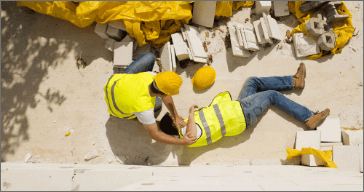